In the german lausitz

They call themselves Sorbs and Wends. Strangers often only notice their existence in Germany’s easternmost region when they see the bilingual town signs that come into view as soon as they cross the rolling hills into this other culture. Here, people defend themselves against the loss of self-will with vigorous dances – both old and new.

Lusatia begins south of Berlin in the fairytale-like Spree Forest, a meadow and moor landscape full of legends and myths, characterized by naturally branching rivers and man-made canals. The city of Cottbus marks the southeastern edge of the Spree Forest, bordered to the south by Central Lusatia with the towns of Spremberg, Hoyerswerda, Weißwasser. Yet further south is the scenically hilly, idyllic Upper Lusatia, which ends with Bautzen in the center of the Saxon tripoint.

Part of the Lower Sorbian settlement area, Central Lusatia was the furnace of the GDR, home to the Lusatian surface mines with their adjoining power plants – an area that was literally plowed up, both geologically and socially.

The Wends and Sorbs living here have a proverb that goes: “God created Lusatia but it was the devil who put the coal under it.” The hunger for energy in the 20th century destroyed 136 villages – Sorbian/Wendish villages. These were dredged away, complete with churches, cemeteries, farmhouses, gardens, dance halls, taverns, stables and fields – everything simply plowed under and their inhabitants transferred to the cities.

The once cozy Sorbian/Wendish towns like Spremberg, Hoyerswerda, and Weißwasser, formerly characterized by handicrafts, became dwelling places, their medieval town centers falling apart. The villagers, and above all the workers needed to mine and burn brown coal had to be housed somewhere. In Hoyerswerda, for example, the number of residents increased sevenfold in just 15 years. This little Sorbian town in the Lusatian glacial valley had fewer than 10,000 inhabitants in 1956, but by 1971 its population had swollen to more than 71,000. Then, twenty years later, this development was reversed. Today, Hoyerswerda’s population has halved again and the town is being renaturalized. Industrial plants are being repurposed and surface mines flooded on a grand scale. Central Lusatia is home to Europe’s largest artificial lakescape, surrounded by endless pine forests on steppe-like soil previously cultivated by the Sorbian/Wendish community.

This cultural area, which once possessed its own Sorbian/Wendish identity and is home to a population deeply influenced by the Slavic-speaking world has become a wasteland, a landscape that is now to be repurposed into a recreation park. But what has happened to the culture, the identity of the people living here? Two theaters can be found in this vast area, one in Cottbus, Brandenburg and one in Bautzen, Saxony. Both promise to stand up for this cultural identity. But the fact that there are two federal states and two Lusatias – Upper and Lower Lusatia – in play here does little to support attempts at unity in the search for contemporary answers in a landscape shaped by changing climate politics and constant marginality.

I set off in search of it – the culture that assimilated the Sorbs and Wends beyond recognition during National Socialism and folklorized the native dances and customs in the spirit of the workers’ and peasants’ state during the Soviet era.

Lusatia is a cultural landscape that is becoming increasingly aware of its roots again. I meet professional and amateur dancers, and witness a very different kind of energy production that feeds on critical retrospection into history and cultivates exceptionally powerful dances – dances that continue to evolve, recharged by the past, and fuel the self-awareness of the new generation.

This research was inspired by photographs by Leipzig artist Olaf Martens, who has always perceived the artificial contrast between elitist artification and everyday life as wrong – just as the dancers in Lusatia do. The report is accompanied by his photo series “Heimat & Tapeten – ein sorbisches Kunstprojekt” (Home and Wallpaper – a Sorbian Art Project). 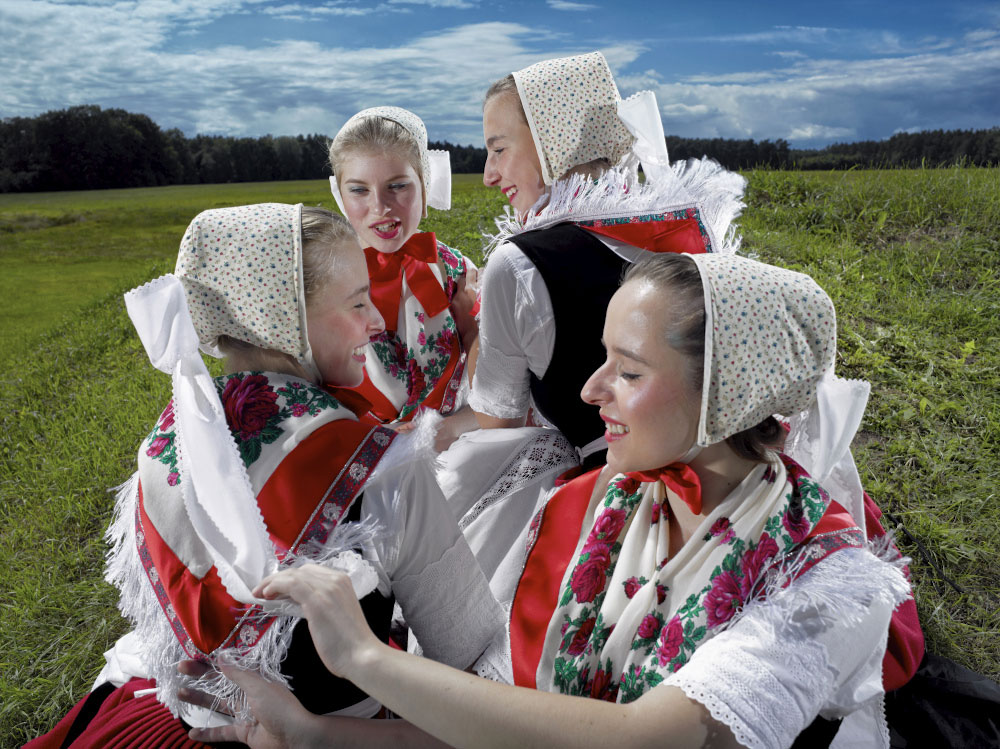 Survival on the German fringes

Why are the dances of the Sorbs and Wends not just folklore? Because it was and is good old politics to divide the Upper Lusatians and Lower Lusatians with their two languages, their two religions, into two federal states so that they were more concerned with themselves than with asserting their own culture. Their surprisingly wild dances are not only historic relics, but more and more often also embody punk, zeitgeist, and resistance.